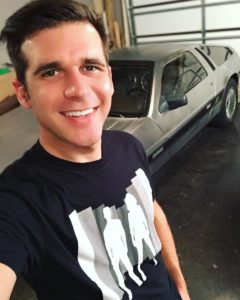 My name is Joshua Mink and I’ve been creating/making videos since I was a kid (back in the VHS days).  In high school, I got serious about video production and decided I wanted to pursue the field as a career.  After graduating from high school I attended college at Arkansas State University and received a degree in Radio-Television/New Media Production.  During my college days, this new thing called YouTube was launched and a friend of mine from film school (I also took a few film classes at the University of Southern California) suggested I create an account to upload videos.  Before I knew it I was posting videos that I was creating for fun at www.youtube.com/jmink and I still do.

Once I was out of college I began working for a local ABC affiliate in their Marketing Department and I stayed there for four years.  Once I left I started my own video production company called Mink Productions.  Over the years I’ve won Addy Awards in the Commercial Production Field and I’ve been named one of the top Wedding Videographers in my area.  But, accolades aside, I love creating videos and I always have.  Over the years I’ve worked in many different avenues of video/audio production and in some degree I always will.  Thanks for taking a minute to learn a little more about me.  Take a look around at some of the things I’ve created and if you’d like to visit my shop to see what I’ve got for sale.